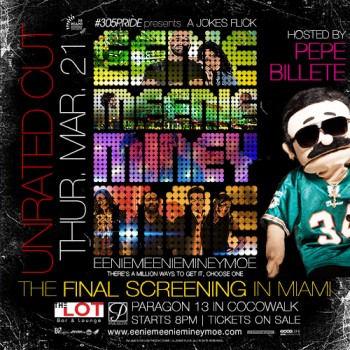 After much success with two screenings and thousands of views Eenie Meenie Miney Moe, caught Pepe Billete’s attention. He sets out to support by hosting the final screening, Pepe Billete supports local filmmakers and is eager to bring #305pride. The unrated version will be shown one last time in Miami before making its way around film festivals nationwide.

Eenie Meenie Miney Moe director Jokes Yanes announces the final screening for Miami International Film Festivals favorite flick. After much success with two screenings and thousands of views Eenie Meenie Miney Moeâ€™s unrated version will be shown one last time in Miami, before making its way around film festivals nationwide. â€œWe believe itâ€™s important to show the film to our community as they are our #1 supporters.â€ Said Jokes Yanes â€œ

The film is based on Raul, a tow truck driver in Miami Beach, who wants to make money and make it fast. He has the perfect tool to open the doors to any car in Miami. Each car holds a prize; he soon learns that every reward has its consequences.

Eenie Meenie Miney Moe is a true testament to the current generation in Miami. The film is brutally honest, unleashing the consequences of the hustle and bustle.