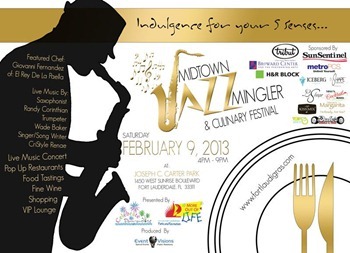 Music Apparel Brand, Tribut Apparel sponsors the 2nd Annual Midtown Jazz Mingler and Culinary Festival, produced by Celebrate Paradise, Inc.  and Event Visions Consulting every 2nd Saturday, from February thru September, 2013.  Tribut Apparel’s own, Manuel Oliver (a.k.a. Urbano) along with their artistic staff will produce custom designed high quality commemorative Midtown Jazz Mingler & Culinary Festival Men and Women T-Shirts to be sold at all 8 events.  The price of each shirt is $25, and a portion of the proceeds from sales will be donated to the American Cancer Research’s project, "Relay For Life."

Midtown Jazz  Mingler  & Culinary Festival  focuses on bringing art and culture to the Community of Midtown located in the Fort  Lauderdale  Northwest Section. Our intention is to reinvigorate the historical and cultural character of Midtown/Sis trunk through partnerships with organizations such as the City of Fort  Lauderdale  Housing Authority and Fort Lauderdaleâ€™s Midtown Business Association, local Chambers of Commerce as well as local and state tourism boards, etc.

A portion of the proceeds earned from the Midtown Jazz  Mingler  & Culinary Festival will be donated to the  Orange Bowl Committee   who has  proven  to be a respected advocate the improvement of programs focused on our youth and   Relay for Life a subsidiary of the American Cancer Society   who are the number one organization for all cancer Awareness in adults and children.