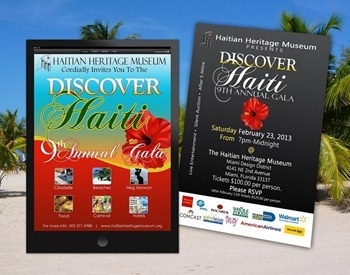 Tickets are $100 Until February 11th then regular admission of $125.00 will apply until the day of the event.
Click Here to Purchase Early Bird Tickets

The Haitian Heritage Museum 9th Annual Discover Haiti Gala will be held on February 23, 2013 from 7:00pm to midnight at the museum located at 4141 NE 2nd Avenue Miami. Tickets to the gala are $100 until the 11th of February and $125 from the 12th of February until the day of the gala. Tickets can be purchased online at DiscoverHaitiGala.eventbrite.com or call (305) 371-5988.
The gala is the museumâ€™s signature fundraiser to support the museumâ€™s outreach and cultural based educational programming at MDCPS including three Museum Magnet schools in the City of North Miami. A taste of Haitian culture will be on full display featuring the museumâ€™s latest exhibition, live entertainment, cocktails and cultural appetizers, as well as silent auction items.

The Haitian Heritage Museum is a non-profit organization committed to highlighting and preserving Haitiâ€™s rich culture and heritage locally, nationally, and internationally. Most notably, the HHM is the only museum in the world outside of Haiti dedicated entirely to the Haitian people. Our goal is to provide a cultural Mecca for South Florida where individuals within and outside of our community can enjoy Haitian art, historic artifacts, ethnic sounds of Haitian music, Haitian films, and a collection of Haitian Literary works. By providing this experience to the public, the museum exposes the phenomenal contributions by Haitian-Americans and creates a cultural legacy for future generations.