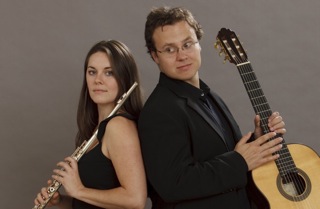 Duo Amantis presents an evening of works by composers from former Yugoslavia, Portugal and California.
Duo Amantis is a ground-breaking, virtuoso flute and guitar chamber music ensemble that specializes in music of the 20th-century, commissioned works from living composers of our own time, and breathtaking arrangements of masterpieces from the Western canon. Founded in 2006 at the California Institute of the Arts, Duo Amantis is known for itâ€™s bold programming of serious chamber music for this often overlooked combination of instruments. The duo has performed at many notable venues and concert series throughout the west coast, including the REDCAT, Los Angeles Sonic Odyssey, Yellow House Concerts , the Alfred Newman Recital Hall, the California Institute of the Arts, the Interlochen Center for the Arts, the University of Oregon, and the Pacific Palisades Chamber Music Series. Notable soloists in their own right, members Tara Schwab (flute) and Michael Kudirka (guitar) have appeared internationally at such venues as the Darmstadt Internationale Ferienkurse fÃ¼r Neue Musik, La Chapelle historique du Bon-Pasteur, Royal Conservatory of Music, Conservatorio de Las Rosas, Ono Guitar School (Osaka), Walt Disney Concert Hall, Zipper Hall, Palace of Fine Arts, Capitol Records, Jacaranda, Hult Center, and the Frye Art Museum. Dedicated educators as well as performers, both Tara and Michael teach at the Interlochen Center for the Arts, and give lecture/recitals at various institutions including the University of Oregon at Eugene and the University of Southern California where they earned their respective doctoral degrees.
Â
Join us on facebook:
http://www.facebook.com/pages/FETA-Foundation/346130482098322