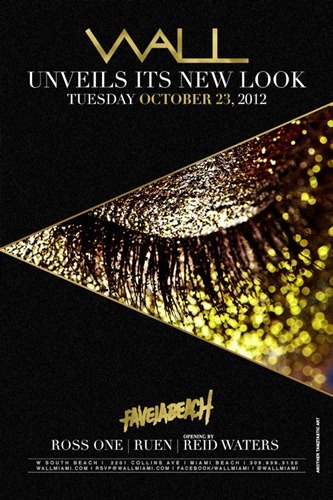 WALL Miami co-owners Karim Masri, Nicola Siervo, Navin Chatani and Jarred Grant are proud to announce the re-opening of their exclusive South Beach lounge on Tuesday, Oct. 23, 2012. Following a month of interior renovations, WALL will debut with an expanded floor plan, new DJ booth and VIP banquettes with smartphone charging stations, among other additions. Complementing the exciting additions to WALL is the launch of LUSH, a new poolside Thursday night party presented by entertainment impresario Michael Capponi, who originally hosted the iconic party in 1992.

The revamp comes on the heels of WALLâ€™s three-year anniversary. KNR Nightlife, a branch of KNR Restaurant Group, spearheaded the redesign along with Studio B, the force behind the modern dÃ©cor of W Hotels, to construct a new look for WALLâ€™s 4,000-square-foot space within W South Beach.

WALLâ€™s highly anticipated redesign will be heralded with a weeklong celebration, including the following events and entertainers: