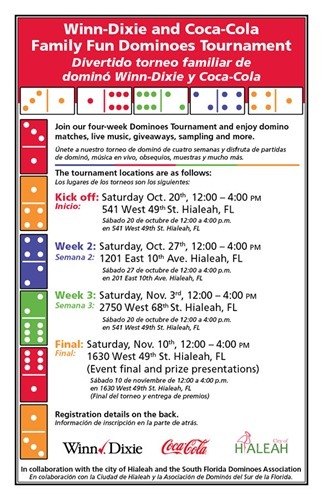 Winn-Dixie and Coca-Cola have teamed up to provide dominoes enthusiasts with chance to compete against their peers in a four-weekend family fun dominoes tournament series in partnership with the City of Hialeah and the South Florida Dominoes Association.  As part of the series, attendees will enjoy live music, food tastings, Coca-Cola product sampling and more. Competitors will be divided into three inter-generational divisions including Young, which is 18 and under, Mid, which is 54 and under, and Seniors, which will include competitors who are 55 years or older.  Teams will have a chance to compete for four top prize packages including Winn-Dixie gift cards, a domino trophy, a Coca-Cola duffle bag full of premiums and more, with the grand prize recipient also receiving a Winn-Dixie/Coca-Cola domino table.

Registration is FREE, but seating is limited. Participants can pre-register by visiting one of the participating Winn-Dixie stores or on the day of the tournament. Tournament registration/check-in begins at 12 p.m. and the tournaments begin at 1 p.m.