The Golden Blaze" and "Bicycle Thieves" 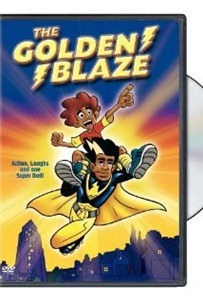 The Golden Blaze –
This incredible feature-length animated movie follows the troubles of two school kids. Fierce rivals, the two regularly butt heads over all manner of issues, ranging from the trivial to the important. The film enters the fantasy realm as an accident occurs and the two boy’s fathers suddenly possess some lethal superpowers, allowing them to enter into battle at the behest of their offspring. A bizarre, funny, and exciting movie, GOLDEN BLAZE is an innovative treat for all fans of fast-paced animated action films. (Animation/Family)

Bicycle Thieves –
A poor young father in postwar-ravaged Rome who finally finds work putting up Rita Hayworth posters around town, only to have his precious bicycle stolen the first day on the job. In a light moment as the father and his young son chase after the thief, the boy attempts to relieve himself against a wall, and his father lets him know they don’t have time for that. In another scene, the father tracks the thief into the kitchen of a brothel.  (Crime/Drama)