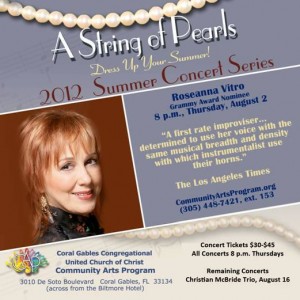 Roseanna Vitro is a reigning member of the jazz community. She has toured the world as an esteemed performer, clinician, recording artist, vocal instructor and ambassador. Her collaborations, covering a wide range of music and stylistic directions, have been cited and celebrated far and wide.

Roseanna is a soulful communicator, showcasing a thirst for swinging hard and possessing an ear for melodic invention. Her strengths include rhythmic acuity and free-spirited spontaneity, often heard in her improvisations, using both scat syllables and lyrics.

Ms. Vitro’s signature energy and grace can be heard on a host of recordings. Notable among them is her breakout recording on Telarc (Passion Dance), which featured Elvin Jones, Christian McBride and longtime musical partner, Kenny Werner, and compelling tributes to Ray Charles (Catchin’ Some Rays), Bill Evans (Conviction), and Brazil (Tropical Postcards). The Delirium Blues Project: Serve or Suffer, on Half Note Records (2008), is a live, blues-based recording of jazz and pop repertoire featuring Kenny Werner’s arrangements.

Having served as an official Jazz Ambassador, sponsored in 2009 by Jazz at Lincoln Center and the U.S. State Department, in 2004 by the Kennedy Center for the Performing Arts and the U.S. State Department, Roseanna has presented concerts and workshops around the world. In 2011, Roseanna joined the MotÃ©ma Music label and released The Music of Randy Newman, which earned a Grammy nomination in the vocal jazz category.