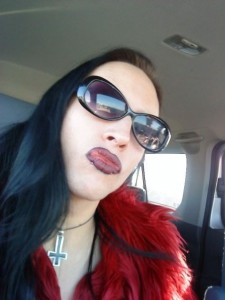 Cynosure is an exponent of Film and Rock Music iconography, currently residing in the sultry plains of Miami. Originally from England, he sought to establish himself as an artist and visionary, providing his unique sense of aesthetics and creativity amongst both the Film and Music Industries.
Possessing a degree from Southampton Solent University, a prestigious educational establishment, Cynosure went on to utilize his talent for directing and producing, composing experimental and artistic short films, commercials and avant-garde theatrical productions.
Cynosure has recently initiated his own Custom Guitar Company, Cynosure Guitars, creating both commercially successful custom products as well individualized thematic art installations. With a focus on musical transcendence, Cynosure Guitars produce a variety of specialized instruments branded as works of art.
Also, as a musician, he has maintained a popular grounding in the Florida Rock music Industry having performed and collaborated with many musical groups and as a solo artist. Now emerging as the lead guitarist within the ritualized atmospherics of gothism and romanticized chaos-magick musical ensemble, Elegy of Madeline, he continues to pervade the parameters of the East Coast.
Obtaining a passion for writing and creative documentation, Cynosure has conceived articles and columns for Rock Magazines and has also been featured in Gavin Baddeleyâ€™s, “GOTH: Vamps & Dandyâ€™s”.