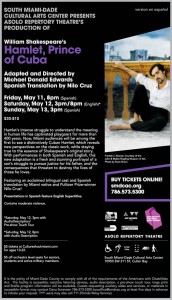 $30-$10
$5 tickets at Cultureshockmiami.com for ages 13-22.
$5 off orchestra level seats for seniors, students and active military members.

Hamletâ€™s intense struggle to understand the meaning in human life has captivated playgoers for more than 400 years. Now, Miami audiences will be among the first to see a distinctively Cuban Hamlet, which reveals new perspectives on the classic work, while staying true to the essence of Shakespeareâ€™s original story. With performances in both Spanish and English, this new adaptation is a fresh and stunning portrayal of a sonâ€™s struggle to pursue justice for his father, and the consequences that threaten to destroy the lives of those he loves.

*Saturday, May 12, 8pm
with Audio Description