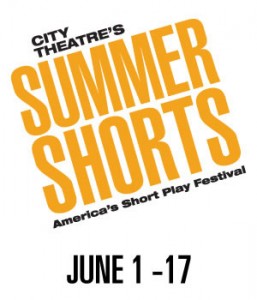 Fast and Furious Fun!
SUMMER SHORTS is one fast and furiously fun program of the nation’s hottest “short” plays! Strung together in a whirlwind of bite-size nuggets, these mini-plays will one minute have you laughing hysterically and the next shocked beyond belief. Hang on for the ride of your life in this wonderful evening of theater that promises something for absolutely everyone!

City Theatre launches its 17th season with its sixth season in residency at the Adrienne Arsht Center in the Carnival Studio Theater. City Theatre’s lightning-quick growth and success has placed an invisible stamp on South Florida’s theater community. Since its inception in 1996 City Theatre has received thousands of script submissions and produced hundreds of original short works by established playwrights and important new voices in the theatre.