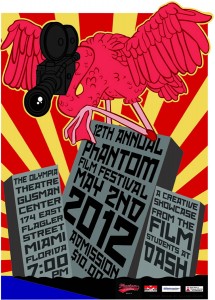 The Design and Architecture Senior High (DASH) 12th Annual Phantom Film Festival will continue its tradition of student cinematic excellence at The Historic Olympia Theater at the Gusman Center for the Performing Arts located at 174 East Flagler Street, Miami on May 2, 2012 at 7 P.M. Tickets are $10 pre-sale at the school, $10 at the door the night of the screening or available through Ticketmaster, ticketmaster.com.

Since its humble beginnings 11 years ago at the historic Lyric Theatre, DASHâ€™s Annual Phantom Film Festival has steadily grown.

â€œIt is only through community and industry support that we can continue to provide our students with this amazing opportunity in the cinematic arts that will enrich their academic experience,â€ added Tim Pike, Lead Film/Entertainment Teacher at DASH.

For 11 years the DASH Annual Phantom Film Festival has provided the Film/Entertainment Technology students at DASH with a public venue to showcase their quality, award winning films.

The Phantom Film Festival also serves as an important fundraiser. Proceeds from ticket sales serve multiple needs; for scholarships to students continuing their education in Film/Entertainment Technology (ET), it gives DASH the opportunity to buy equipment and software to keep the Film/ET program current with college expectations.

DASH Film students continue to be recruited and accepted into the top films schools in the United States. A partial list of colleges where alumni from the DASH Film program are currently majoring in film studies includes NYU Tisch, USC, FSU, SVA, Miami-Dade, RIT, UNC Arts and Art Center in Pasadena.