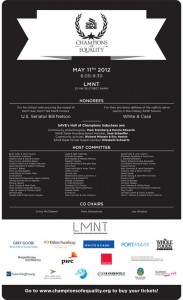 The SAVE Dade Champions of Equality Awards Reception and Silent Auction is an annual event established to honor members of the community who have significantly advanced the cause of equality for the lesbian, gay, bisexual, and transgender (LGBT) community in Miami-Dade County.

This year’s honorees include the Honorable United States Senator Bill Nelson and White & Case, both of whom helped strike down the ban which prohibited gay and lesbian Americans from serving openly in any branch of the U.S. Armed Forces.

2012 Honorees:
For 16 years a discriminatory ban, the so-called Donâ€™t Ask Donâ€™t Tell (DADT) policy, forced gay and lesbian service members to serve without disclosing their sexual orientation. Over 13,000 service members have been discharged simply for being lesbian, gay, or bisexual. As a member of the Armed Services Committee United States Senator Bill Nelson was one of the critical votes ensuring the repeal of DADT would pass the entire senate as it did in December of 2010. His support for equality and in appreciation of his vote for fairness, even in our military, earns him the 2012 Champions of Equality Award.

Senator Nelsonâ€™s work was not done alone. White & Case, a for-profit law firm, stepped up to defend, pro-bono, the rights of new and existing service members willing to serve our countryâ€™s military who happen to be gay or lesbian. White & Case argued for their client, The Log Cabin Republicans, that the government needs to prove the â€œimportant government interest at stake to intrude on the personal and private lives of homosexuals.” Their willingness to go above and beyond to protect the interests of service members earns them the 2012 Champions of Equality Award.

Too often, we overlook the people who have spent years carrying the torch locally. This year, we will present our second group of SAVE Hall of Champions, designed to honor long-term volunteers who have contributed mightily to advance the cause of equality for the LGBT community in Miami-Dade County.