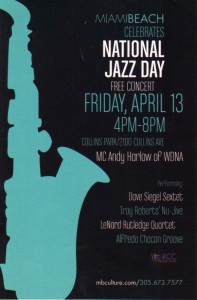 Friday, April 13, from 4 to 8 PM
Collins Park
Collins Avenue and 22nd Street
South Beach
next to the Bass Museum of Art
The concert is free
For further information contact KCC Productions at 305-332-2623 or visit kccproductions.com.

Featured will be the Dave Siegel Sextet, Troy Roberts’ Nu-Jive, the LeNard Rutledge Quartet, and the Alfredo Chacon Groove. Come sit on the grass, bring a chair, or spend the four hours dancing!

The City of Miami Beach Cultural Affairs Department presents a free concert in Collins Park on Friday, April 13, from 4 to 8 PM in honor of National Jazz Day. The event is produced by KCC Productions. Featured will be the Dave Siegel Sextet, Troy Roberts’ Nu-Jive, the LeNard Rutledge Quartet, and the Alfredo Chacon Groove. Come sit on the grass, bring a chair, or spend the four hours dancing!

Dave Siegel’s sextet will open the show at 4 PM. Dave is a Miami-based producer, songwriter, and musician whose name has appeared as such on over 30 million records sold worldwide. David is known for performing most of the instruments on his own productions, as well performing as a musician for countless sessions outside of his own work. For the first half-hour the sextet will be playing Dave’s arrangements of favorite standards from the Great American Songbook and the classic Jazz repertory. Beginning at 4:30 the stage will be open to sit-ins by music students and professional musicians. Those interested should pre-arrange their appearances with KCC Productions by the side of the stage at 3:30.

Baritone LeNard Rutledge follows at 6 PM with his quartet. Captivating, soul stirring, earthy and funky. These are just some of the words used to describe the song stylings of LeNard Rutledge. LeNard he has been a featured vocalist at top Jazz spots in South Florida. LeNard has shared the stage with a number of highly respectable jazz artists such as: Nnena Freelon, Dee Dee Bridgewater, Kenny Drew Jr., The Fred Thomas Band, and Harry Allen. In May of 2006, LeNard was named BEST JAZZ ARTIST, by the Miami New Times magazine.

Concluding the program at 7 PM will be the Alfredo Chacon Groove, a sextet led by vibraphonist, composer, and percussionist Alfredo Chacon. who is debuting in the USAâ€™s jazz scene after almost two decades long career in Europe. Featured is his new album â€œMAGIC PLACEâ€ in which his Cuban roots fuse with influences from other genres like funk, bossa, soul and bebop in a blend of beautiful melodies and groovy rhythms, resulting in fresh, colorful, happy and elegant music, full of surprises that will send the audience home with their feet tapping.