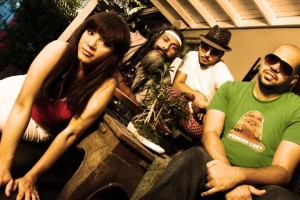 Live From Loews and The Stage Present Elastic Bond

The connection comes when you turn it up, and youâ€™re transported to a funky island in the middle of paradise. Miami-based group Elastic Bond fuses Latin, Soul and electronica with a foundation of songwriting, melodic vocals and positive vibes. Venezuelan producer Andres Ponce and Honduran singer-songwriter Sofy Encanto formed the band in 2006, and later joined forces with guitarist Buffalo Brown and trumpet player David Burgos to expand its unique sound.

Complimentary Valet Parking when you mention Live From Loews!