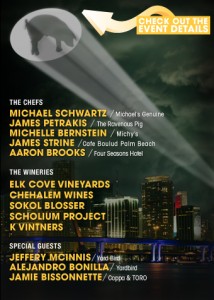 Tickets: $125 per person for general admission; $200 for VIP, which includes a welcome cocktails from The King’s Ginger, one hour early access to sample dishes from three of the competing chef stations, a showcase of Rappahannock Oysters and chance to win a year supply of meat and cheese from Cochon 555 and Murray’s Cheese.

Guests will be treated to an epic pork feast of five whole heritage pigs prepared by five chefs and wines from five family wineries, including Scholium Project, Elk Cove Vineyards, Sokol Blosser, Chehalem Wines, and K Vintners. The evening will also include wines from SALDO and Robert Kacher Selections, a butcher demonstration by Alejandro Bonilla of Yardbird and your chance to win cookware through an interactive tasting contest with Jamie Bissonnette of Coppa Boston and Le Creuset. A special engagement with Domaine Serene of Oregon paired with Iberico De Bellota by Fermin. Libations include Anchor Brew, tastings of Chinaco Tequila and the “Perfect Manhattan” Cochon 555 bar with Daniel Hyatt of Alembic SF featuring Hirsch, Angel’s Envy, Eagle Rare, Buffalo Trace, Hudson Whiskey’s Baby Bourbon and Luxardo. In preview of our new Labor Day event, Yardbird’s Jeff McInnis will will serve a Heritage BBQ whole hog family meal. Attendees don’t forget that everyone votes for the “Best Bite of the Day” before we combine the consumer votes (51%) with the technical score from the local judges (49%) and announce one chef as the Prince or Princess of Porc. The winner will go on to compete against other regional winners at the finale Grand Cochon event at the FOOD & WINE Classic in Aspen, June 17, 2012.

To start the awards ceremony, we host a 25th anniversary champagne toast to the James Beard Foundation, sponsored by Laurent-Perrier Champagne, now celebrating its 200th year. To close the evening, we offer an exclusive chocolate experience from Xocolatl de David and cold-brew from Safari Cup Coffee. Farrarelle is the official water of the 2012 US Tour.

Created by Taste Networkâ€™s Brady Lowe in 2009 in response to the lack of consumer education around heritage breeds, COCHON is a national event series that takes place in 14 major markets. Every January, COCHON 555 embarks on a 10-city culinary competition and tasting tour where 50 chefs are selected to prepare a â€˜snout -to-tailâ€™ menu created from heritage breed pigs. The 10 winners of each regional event are flown to Aspen for the Food & Wine Classic in Aspen for the final competition, Grand Cochon. Cochon All-Star, Cochon Heritage Fire and a new event called Cochon Heritage BBQ competition will be hosted in Memphis on Labor Day every year starting in 2012. For more details about the events, visit www.cochon555.com or follow @cochon555 on twitter.

Why should we care? First, imagine if we only had one or two types of dogs in the world. One small dog, and one large dog. Everyone had the same dog, and there was no variety. Taking your child to pick out a dog and there were no choices. How boring would that be? For me, diversity is the flavor of life. I want choices, I deserve choices for different days, different moods and different recipes and techniques. I can’t imagine going bakery on Sunday morning and not having any choices, can you? Again, imagine a world with only one doughnut. The idea is standardization defined. My goal is to provide choices to chefs and to diversify the pig landscape so life is more interesting for those of us who care. It’s important to let family farms know that we care about the choice to buy a better, more flavorful product, even if cost is higher. In the end, we diversify the conversation on the pasture and hopefully that will reach your kitchen someday soon. The context of the event is better for the ecosystem, it’s better for the marketplace, it’s the choice we want. Buying into heritage pork is synonymous with putting your money directly into the farmer’s pocket and creating a diversified landscape of flavor for the future. That feels good to me, and don’t forget flavor is king. The best part, heritage pork is not super expensive, it just takes time to find a local farmer, butcher shop or restaurant buying from these farms.

Post to FaceBook
Over 1200 pounds of heritage pork 5 CHEFS / 5PIGS @COCHON555 MIA April 1st! @chefmschwartz @chefmichy @brookschef @jamesstrine76 @ravpig Who will win? Check out more: http://j.mp/555Miami – its not too late to win tickets