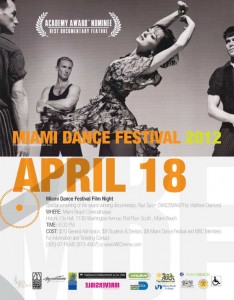 Paul Taylor: DANCEMAKER, a 1998 documentary by Matthew Diamond. Paul Taylor has been hailed as the world’s greatest living choreographer, having created a stunning body of dance work over the last forty years. When the curtain opens on the Paul Taylor Dance Company, audiences see a troupe of dancers soaring through the works of this formidable genius. However, behind the scenes lies a complex world of ambition, emotion, creation, and hard-nosed decisions. Dancemaker is a film that tells the tale of this extraordinary, peculiarly American company. Cutting from stage to backstage, the film looks at the rise of Taylor from solitary child to star dancer to master choreographer. The film travels with Taylor and Company from the rehearsal studio to an embassy-sponsored tour of India through a strike-threatened Broadway season. And finally, it gets to the core of Taylor’s talent, as he wrestles with the making of a new dance that is the centerpiece of his company’s season and of the film. Academy Award Nominee Best Documentary, Golden Spire Winner for Best Arts Documentary San Francisco Film Festival

Tickets for all ticketed events are available online at: www.momentumdance.com.
For Festival information call: 305-858-7002 or the event venue.