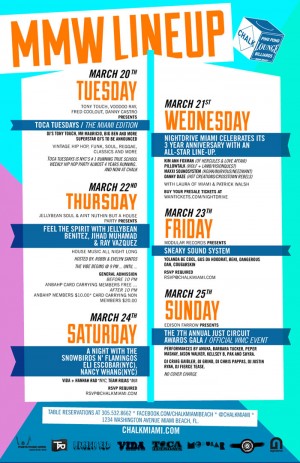 Chalk Ping Pong and Billiards Lounge, along with SuperMarket Creative and Nightdrive Miami, is proud to present its lineup of musical talent for Miami Music Week 2012. A slew of renowned and emerging DJs will take the helm at Chalk, the ultimate adult playground, to showcase the venueâ€™s state-of-the-art audio and new music platform during the weeklong celebration of electronic and alternative music. As a special treat for loyal patrons, Chalk will stage contests for ticket giveaways for each night via Facebook and Twitter, with winners announced the week of March 19.