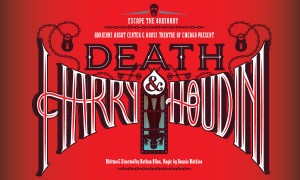 The Adrienne Arsht Center For The Performing Arts Of Miami-Dade County Presents The Miami Premiere Of Death And Harry Houdini
An Acclaimed Production From The Award-Winning House Theatre Of Chicago Currently Playing To Sold-Out Audiences! 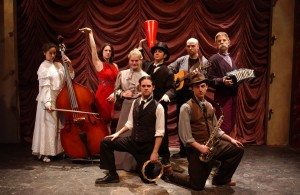 The Adrienne Arsht Center for the Performing Arts of Miami-Dade County proudly presents The House Theatre of Chicagoâ€™s critically-acclaimed production of DEATH and HARRY HOUDINI, commended by the Chicago Tribune as â€œMagic of the very highest order!â€ This play marks the second House Theatre of Chicago production presented at the Adrienne Arsht Center after last seasonâ€™s The Sparrow. Written and directed by The Houseâ€™s Artistic Director Nathan Allen, DEATH and HARRY HOUDINI delivers a roller coaster ride through the life of the great magician, Harry Houdini, and his life-long battle against Death. House Company Member and award-winning magician, Dennis Watkins, has joined the cast and is set to perform Houdiniâ€™s most renowned and dangerous escapeâ€”the dreaded Water Torture Cellâ€”in this dark and tumultuous story guaranteed to keep audiences on the edge of their seats. DEATH and HARRY HOUDINI plays in the intimate Carnival Studio Theater (Ziff Ballet Opera House) from April 26 â€“ May 20, 2012 as part of the Theater Up Close season.

â€œIt is a pleasure to once again work with the stellar House Theatre of Chicago,â€ said M. John Richard, president and CEO of the Adrienne Arsht Center. â€œLast yearâ€™s â€˜The Sparrowâ€™ captivated audiences with its dramatic storyline and surprising innovation. This year, weâ€™re looking forward to The Houseâ€™s take on Harry Houdiniâ€™s life and, most of all, the rare opportunity to witness his most infamous and extraordinary acts of magic.â€

Death and Harry Houdini playwright, Nathan Allen, has made his much-anticipated return to his first original script having spent the last decade developing The Houseâ€™s voice. The Houseâ€™s original production of the Houdini-based play contained magic, music, dance, and film. Now, Allen–along with The Houseâ€™s incredibly diverse ensemble of artists–brings thrilling new magic acts and an unparalleled ensemble theater experience to the life of historyâ€™s greatest magician.

Dennis Watkins, celebrated actor and third-generation, award-winning magician, brings a lifetime of creating magic to the character of Harry Houdini. Watkins has designed a fantastic landscape that highlights many of Houdiniâ€™s original creations as well as a performance of Houdiniâ€™s most infamous stage escape, The Water Torture Cell, in which he is locked upside down in a tank of water with only as much time to escape as he has air in his lungs. This ingenious production boasts the first-ever recorded performance of The Water Torture Cell in the round.

Dennis Watkinsâ€™ grandfather passed down his legacy of magic as the owner of one of the nationâ€™s first mail-order magic shops and successful up-close magician. Watkins still cherishes a set of original photos his grandfather took as a child of Harry Houdini performing the Hudson River Packing Box Escape. â€œGiving away such magical experiences runs as deep in my family as it does in The House Theaterâ€™s ethos and aesthetic. Grandpa used to tell me that the point is not to fool people. The point is to make them imagine. Give people a gift by letting them experience what they have forgotten: what it was like to be a kid. It is about them. It is never about you,â€™â€™ said Watkins.

Death and Harry Houdini will close the Arsht Centerâ€™s 2011-12 Theater Up Close series, which features artistic collaborations from stellar local theater ensembles and nationally acclaimed theater companies. The 2012-2013 season will be announced later this spring!