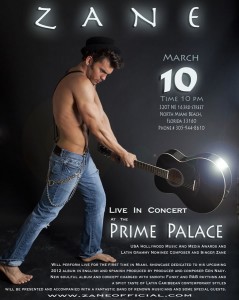 Zane is a Latin Grammy nominated, Billboard charted pop/rock singer. What would happen if you mixed essences of Ricky Martin, Sting, George Michael, Juanes, John Mayer and Seal together and sprinkled it with Venezuelan sexiness and some Sofrito? You would get ZANE. His music is sexy, sensual and emotional. He was groomed by famed Grammy winning producer: Marco Flores( Thalia, Gloria Estefan, Carlos Ponce, Jose Feliciano and others ), and has worked with Latin Grammy nominated artist: Claudio Corsi and Gen Nady, among others. Zane and his band will be going out on a summer tour in support of his upcoming album. His show on March 10th is being filmed in front of a live audience.