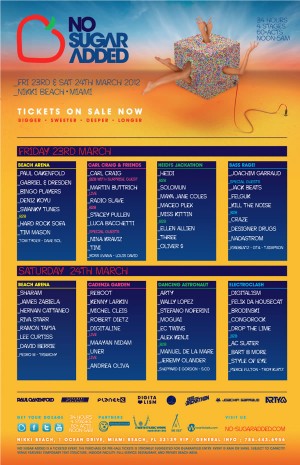 Grab your beach gear and sunglasses – the wait is finally over! Following the announcement that No Sugar Added is returning to Miami Music Week 2012 as a massive 2-day electronic music experience, the beach festival’s 4th edition unveils its biggest lineup to date, set for Friday March 23rd and Saturday March 24th at the newly renovated Nikki Beach in Miami. With over 60 world-renowned artists on the bill, NSA Miami 2012 will feature every imaginable EDM genre from progressive to tech, electro, dubstep, trance, and techno, packed with premiere headliner performances including Grammy winners and nominees, plus special guests, scene shakers, and breakthrough artists of the year.

Representing the Beach Arena on Day 1 is two-time Grammy Nominee Paul Oakenfold, who has shaped an entire genre of music over the last three decades and is one of the leading forces in electronic music to this day. The unveiling of NSA’s new stage area this year, The Garden, welcomes techno legend Carl Craig as he hosts his handpicked underground lineup for Carl Craig & Friends, where himself and a Special Surprise Guest will be performing a Miami Music Week exclusive back-to-back set. BBC Radio’s first lady Heidi proudly introduces the 2012 version of her Jackathon party which will feature an A-list collection of deep house and underground including artists of the moment Maya Jane Coles and Maceo Plex. Meanwhile numerical music pioneer Joachim Garraud takes full control of the Bass Rage stage along with special guests Jack Beats and an array of global electro and dubstep artists.

Day 2 on the Beach Arena sees Grammy winner Sharam leading his way as he returns to NSA for his third consecutive year, along with UK’s James Zabiela, Argentina’s Hernan Cattaneo, and a handful of other international selections. The Garden converts into a full-on Cadenza Music showcase with Reboot and his label-mates putting together a full day of special DJ sets and LIVE shows. Moving on, world-leading EDM experts Dancing Astronaut give way to a tremendous lineup of progressive, trance, and tech with Russia’s bright star Arty and Spain’s Wally Lopez on top of the bill. Finally, pioneers of the electro-funk and indie dance movement Digitalism make their way to Miami from Gernany as they will headline Saturday’s Electroclash Stage, filled with the hottest electro acts of today and the future including Felix Da Housecat, Brodinski, and many more.

Full Lineup By Day And Stage