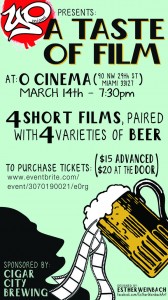 Yo Miami invites you to quench your thirst with A Taste of Film:

Combining two of our favorite things, beer and movies, we’re taking you on a flight of fancy that will showcase local film makers’ short films and pair each one with a beer that reflects the movie’s central theme.

We’ll have our very own resident beer expert on hand sharing some background on each brew as it’s served in between each short so that you can see why we paired them.

For a ticket price of just $15 ($20 at the door) you’ll be getting 1 serving of each of the (4-5) beers, along with a cup of your favorite brew on the house after the screenings. So not only do you get a great experience checking out some local talent on the screen but you get a nice buzz to boot.

We’ll be announcing more details like which beers will be served as well as which films will be screened as the date approaches so stay tuned!

*Seating is going to be limited so make sure to buy your ticket online or you’ll miss out. There’s going to be 2 screenings so everyone gets a chance to get in on the fun (7:30pm & 10pm)

Combining two of our favorite things, beer and movies, Yo Miami is taking you on a flight of fancy that will showcase local film makers’ short films (approx 10 minutes) and pair each one with a beer that reflects the movie’s central theme. After the success of its first event (Wonâ€™t You Be My Neighbor?) Yo Miami is changing things up and mixing seemingly disparate elements in a way that will bring people together for an altogether new experience.

Attendees will pay a ticket price of $15 plus applicable online fees (or $20 at the door) in exchange for the chance to view 4-5 short films, each one accompanied by its own beer. The films will be hand selected to reflect some aspect of life in Miami which is representative of its culture, and ideally be created by locals as well. The beers selected will share some commonality with the short film it accompanies and background information will be shared between each film to explain how each element relates.

The event will be hosted at O Cinema, â€œa cutting-edge independent cinema located in Miami’s Wynwood Arts District that specializes in showing first-run independent, foreign, art, and niche market films.â€ A nonprofit organization, the theater has a history of supporting the arts and the local scene without limiting themselves to things your average movie theater does. Whether itâ€™s dinner and a movie with Chef Michael Schwartz, or a live performance by the Shameless Burlesque troop for a screening of Crazy Horse, they definitely think outside the box.

Cigar City Brewing is going to be supplying the beers for the night, showcasing some of the best Florida has to offer. A relatively small brewery, Cigar City takes great strides to support the stateâ€™s burgeoning craft beer industry and even serves other breweriesâ€™ products in their tasting room. They also strive to use local ingredients when and where they can. Not only do fresh local ingredients help them to make better beer, it helps them make beer that reflects the culture and heritage of Tampa Bay, where theyâ€™re based.

What began as a passion for art, music and Miami has evolved into a force to be reckoned with in the local scene. Bringing together creatives from all walks of life, we strive to shine a light on the elements of Miami culture that should be recognized and celebrated. Connecting venue owners, musicians, artists, entrepreneurs and media outlets, Yo Miami is all about connecting creative people with those in need of creativity. www.yo-miami.com