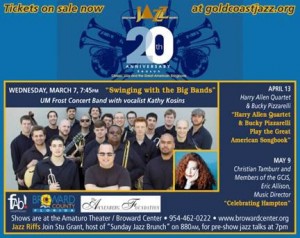 The music of the big band era is eternal and the University of Miamiâ€™s Frost Concert Jazz Band brings new and inventive arrangement of this timeless music. On Wednesday, March. 7, the Gold Coast Jazz Society presents the Downbeat Award winning jazz band in a concert with Resonance Records jazz vocalist, Kathy Kosins. The concert begins at 7:45pm at the Amaturo Theater, located at 201 SW 5th Ave, Fort Lauderdale, Florida. Single tickets are $40 and student tickets are $10 with student ID. Tickets can be purchased through the Broward Center Box Office at 954-462-0222 or online at either http://www.goldcoastjazz.org or www.browardcenter.org. A pre-concert Jazz Riff jazz talk will be given by jazz radio personality Stu Grant at 7:00pm in the theater before the show.

The UM Frost Concert Jazz Band is a rocking jazz machine. Directed by Dante Luciani, the Frost Concert Jazz Band has been the University of Miamiâ€™s premiere large jazz ensemble for over 30 years. The band is renowned for its tight and energizing performances, outstanding soloists and talented student arrangers and has numerous recordings to its credit, which showcase the long lineage of world-class talent. As a winner of numerous Downbeat awards, the band has been tapped for outstanding performance by a college big band (2006 and 2007) and was the graduate college winner in the Large Jazz Ensemble category for 2010. Recent guest artists performing with the band include Dave Liebman, Joe Lovano, Slide Hampton, Randy Brecker, Ira Sulllivan, Shelly Berg, Dave Koz, Jeff Hamilton and John Clayton.

ASCAP award-winning vocalist Kathy Kosins has won the hearts of critics and fans around the globe with her eclectic musical palette that expands the rich history of jazz. Born and bred during the Motown era of Detroit, she began singing and arranging background vocals for producer Don Was in the early eighties, which led to her becoming one of the most sought after session singers. As a lead vocalist she recorded for both Carrere (Sony) and Quality Records and later toured with Was/Not Was. A Resonance Records artist, her debut CD with Resonance “To the Ladies of Cool,” will be released worldwide on March 6, 2012. The CD was produced by George Klabin and Kathy Kosins and features arrangements by the renowned jazz pianist Tamir Hendelman.

Tickets are still available for the March 7 performance. For further concert information call the Gold Coast Jazz Society at 954-524-0805 or go online to http://www.goldcoastjazz.org