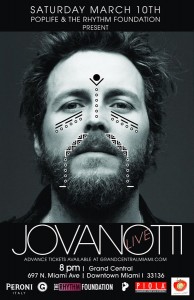 Italy’s #1 star has moved beyond his hip-hop start into a big band world/ funk project – an Italian James Brown with a live show that is out-of-control good.Until now, American audiences have had mere glimpses of the brilliant career of Italy’s most famous contemporary artist, the Tuscan singer and songwriter and rapper Lorenzo Cherubini, professionally known as Jovanotti.

Over the past twenty years his recorded and live collaborations with Michael Franti, Ben Harper, The Beastie Boys, Juanes, Carlinhos Brown, Sergio Mendes, and Bono, among other well-known names, have occasionally caught the ear of the adventurous listener. Delivering lyrics in a half-sung, half-spoken style that has something esthetically in common with a downtown reading by a Beat poet, Jovanotti uses the rhythm and the ricochet of consonants and catchy melodic hooks to create songs that are instantly accessible to an international audience.

“At 43, he still rocks the stage like a lanky, garrulous rap star, but Jovanotti now sees his own music as a blend and a refraction of all of his favorite artists, from Run-DMC to Stevie Wonder to Chico Buarque..” – The Village Voice