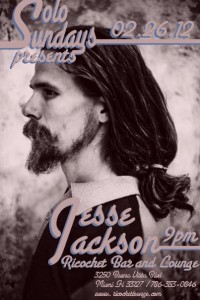 Jesse Jackson has been a calling Miami home for quite some time.
He has been delivering his urban folk consistently for hungry crowds all over the country! His is a story that begins with a birth in Italy (to a sculptor father and a songwriting mother); continues through a rise in Cody, Wyoming, and an exile in Maine’s Hyde School (a kind of prep school for delinquents); and inexplicably deflects to Vegas. It is, then, a story of goings and the stir that such moves make. As Jackson says, “It certainly helps to leave, whether you’re attached to a place or not.”Check out Jackson Sunday the 26th at Ricochet.