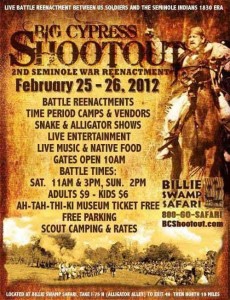 The battle reenactments honor the Seminoleâ€™s struggle and sacrifice to remain in their homeland and will feature authentic weapons, soldier and warrior attire and tactics typical of the Second Seminole War.

In the 1800s, a total of three wars were fought by the U.S. military against the Seminoles. These campaigns were the longest, costliest, and bloodiest of all the Indian wars. Although many Seminoles were killed or removed to present-day Oklahoma, they were never defeated, and to this day, more than 3,000 Seminoles are known as â€œThe Unconqueredâ€ Seminole Tribe of Florida.