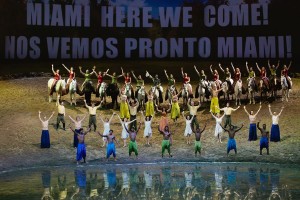 After a successful run in Atlanta, site of its US premiere, Odysseo, the new touring show by renowned production company Cavalia Inc., is already preparing for its Miami run, premiering under the White Big Top February 29 at 8:00 p.m. in Bicentennial Park, two weeks earlier than originally scheduled.

In Odysseo, spectators join human and equine artists on a journey through some of the worldâ€™s most wondrous landscapes. Cavaliaâ€™s new production marries the equestrian arts, stage arts and high-tech theatrical effects at never-before-seen levels. The 80-ton technical grid, as big as that found in the best-equipped permanent theaters in the world, supports lighting, a full-size merry-go-round, and 18 cinema projectors that create high-definition landscape backdrops on screens twice the size of a standard IMAX. These scenes surround the worldâ€™s largest touring stage, 27,000 square feet, rendering Odysseo a 5-D mega-production, a feast for the eyes that still succeeds in delivering the spectacular with soul.

â€œFor now,â€ added Latourelle, â€œthe task is to move Odysseoâ€™s touring village from Atlanta to Miami, no small undertaking. For the horses and artists, itâ€™s time to relax, but for the technical crews itâ€™s full-steam ahead!â€

After their final show in Atlanta, Odysseoâ€™s 71 beautiful, highly trained horses will travel in six trailers the 365 miles to their â€œhorse spaâ€ between runs, Peninsula Farm in Ocala, Florida, a world-class equestrian center. Odysseoâ€™s publicist, JD Pelletier, will Tweet and post on Facebook daily about the horsesâ€™ journey there and their activities while on vacation.

Depending on their discipline, the horses spend between six months and ten years training to be in the show. But accompanied by their grooms, artist-riders, vet techs, blacksmiths and stable managers, Ocala is really a vacation for these horses â€“ no daily rehearsals, just playtime as they freely roam through fields and get plenty of pampering every day. After their three-week respite they will head to the Odysseo village in Miamiâ€™s Bicentennial Park on Thursday, February 23.

Covering an area greater than a football field, Odysseoâ€™s is the worldâ€™s biggest touring Big Top, yet in terms of everything from seat size to audience proximity to the action, it feels like a permanent theater. To recreate this engineering marvel in Miami, a crew of 230 workers in Atlanta will load everything onto 110 18-wheel trucks bound for Miami. After five days setting up in Miami, Cavalia will invite media for a first tour inside the White Big Top on Wednesday, February 15. In total, three weeks are required to recreate the entire village, a process that will take 130 Cavalia Inc. employees plus 150 local Miamians working around the clock to be ready for the premiere.

While technical crews are hard at work, many of Odysseoâ€™s onstage artists, hand-picked from eight different countries for their particular expertise, will return to their native lands between cities for a little R&R with their families. The troupe of 11 incredibly powerful Guinean acrobats, who grew up tumbling and flipping on the beach in their spare time, will head back to their African village. The showâ€™s dressage champions will relax in rural France. Quebecois aerialists will snowshoe and ski, then warm themselves around the fire, and other artists will return to Spain, Italy and Ukraine, among other countries. All will be back for rehearsals in Miami before the big premiere at the Odysseo site in Miamiâ€™s Bicentennial Park on February 29 â€“ leap day!