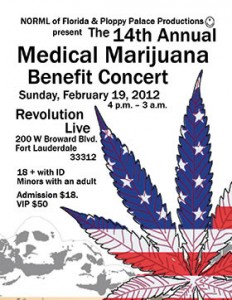 $15 Discount Ticket in advance
$18 at the door
$50 VIP Tickets include (entrance to all areas, a dedicated VIP bar and a year’s membership to NORML of Florida)
Buy tickets here

NORML of Florida, Ploppy Palace Productions and Revolution Live will be hosting the 14th Annual Medical Marijuana Benefit Concert to raise funds for NORML of Florida (National Organization for the Reform of Marijuana Laws), Patients Out of Time, The Silver Tour and the PUFMM (People United For Medical Marijuana) medical marijuana campaign to protect patientsâ€™ rights.

Come out early & enjoy the day with us! This is a family event with a diverse range of musical styles & creative talents.

On Sunday, February 19, 2012, NORML of Florida, Ploppy Palace Productions and Revolution Live will be hosting the 14th Annual Medical Marijuana Benefit Concert to raise funds for NORML of Florida (National Organization for the Reform of Marijuana Laws), Patients Out of Time, The Silver Tour and the PUFMM (People United For Medical Marijuana) medical marijuana campaign to protect patientsâ€™ rights. Currently there is a statewide campaign to change the medical marijuana laws in Florida that includes legislation in the Florida House and Senate (a historic first) as well as a statewide petition drive. As part of this three stage extravaganza, some of South Florida’s top bands, spoken word artists and community activists will join together for patientsâ€™ and physiciansâ€™ right to use medical cannabis.

As a testament to the diversity of supporters for this cause, there will be a broad variety of musical styles including jazz, blues, rock, reggae, folk, hip-hop, funk, experimental, tribal rhythms, flamenco, Traditional Peruvian, world beat fusion, psychedelic grooves and various interactive jams.

In addition, Elviza, Symphony, Stacy Oh, Lili Barrera, Marie Insua, Sofia Luna and other dancers will be performing a variety of dance and movement pieces to energetic, rhythmic percussion and ambient tones. Coconut Grove Jugglers Exchange will be juggling various items and entertaining the crowds with a festival vibe.

Yvonne Gougelet will be presenting an interactive performance art piece with a medical marijuana theme.

Gabriel Orenstein will be showcasing a special marijuana activist video that will be projected during the show.

Plus Anibal Fernandez, Linx and other creative artists will be rendering a live painting demonstration to visually complement the music.

NORML of Florida, The Silver Tour, PUFMM, Patients Out Of Time, the ACLU of Great Miami and various other organizations will have informational booths with literature and handouts to help educate about community issues and the medical marijuana campaign in Florida.

The event will work to raise funds and awareness for NORML of Florida, The Silver Tour, PUFMM and Patients Out Of Timeâ€™s medical marijuana campaign and the protection of patientsâ€™ rights. Previously, a person’s right to use medical necessity as a defense to marijuana charges has been upheld by several appeals courts in Florida. Marijuana has proven therapeutically useful in treating numerous medical conditions including glaucoma, muscle spasticity, arthritis, MS, and the nausea related to AIDS and cancer chemotherapy. In 2010, the City of South Miami passed a resolution to support medical marijuana on a statewide and national level – this is the first city in Florida to endorse the issue. Currently, there are companion bills to reform medical marijuana laws in the Florida House of Representatives (HJR 353) and the Florida Senate (HR 1983) – this is a historic first – we are encouraging people to contact their elected officials and have them endorse these bills. At the moment, there are 16 states that have laws allowing marijuana to be used as medicine.

In addition there will be vendors and small businesses promoting and selling their merchandise, including The Wallflower Gallery, Between Spirit & Stone Jewelry, Shamanic Harmonics, Progressive Rags, Man With The Magic Hands – Jeff Brown LMT, Awesome Rockin’ Massage by Kelly Cordova LMT and selected independent corporations.

The 14th Annual Medical Marijuana Benefit Concert at Revolution Live is currently looking for supportive sponsors and unique vendors to help to build up the community outreach and contribute to the cause.