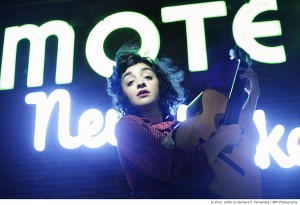 After 3 years of touring in the US, Europe, and Cuba, Sol Ruiz heads back home to Miami to begin recording her first full-length CD in Studio 71 with Bobby MacIntyre. To raise funds for the record, Sol along with Kickstarter will be having a fundraiser at PAX Miami on Feb. 10th. She will be in town for only one month before returning to Europe for continued touring.

The album is influenced by social matters such as the effects of the Cuban embargo that kept her from meeting her family in Cuba, technologyâ€™s way of possessing peopleâ€™s lives, and the abuse by doctors prescribing drugs to healthy patients just because they want everyone to believe they have a disease.