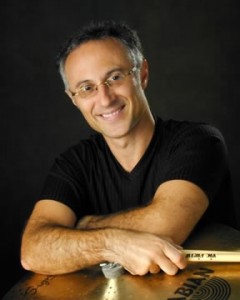 featring Reuben Hoch on drums, Ken Burkhart on B3 organ, Tom Lippincott on guitar, plus John Michalak on sax and Chad Bernstein on trombone

Adrenaline Jazz is a B3 organ trio comprising Drummer Reuben Hoch, Hammond B3 Guru Ken Burkhart and Guitarist Tom Lippincott. The group is a Jazz/Jam band that focuses on groove. The group plays original compositions contributed by all its members and also covers music from The Beatles, The Rolling Stones and Medeski, Martin and Wood. The group derives inspiration from the great groups of New Orleans such as Galactic and Stanton Moore. The group takes its listeners on a musical journey while never ignoring its rhythmic roots.

Reuben Hoch was born in New York where he received his musical training. He began playing professionally at the age of 16 and by 19 was an active member of the NY jazz scene. He has performed and recorded with Dave Liebman, Jim Pepper, Greg Osby, Jeff Andrews, Lonnie Plaxico, Ed Schuller, Leni stern, Don Friedman, Bobby Thomas Jr., West End Avenue, The RH Factor, Reuben Hoch and Time, The Chassidic Jazz Project, The Bobby Lee Rogers Trio and JewJamm to list a few. Reuben is the founder of Adrenaline Jazz.
Ken Burkhart was born in Pennsylvania and has been a dedicated jazz organist and piano player for a half century. His credits include the very significant south Florida jazz ensemble, Jazzberry Patch. Ken has performed extensively with Drummer Danny Burger and many other jazz dignitaries. His contribution to Adrenaline Jazz is significant through the groove that he creates on the B3 and additional keyboards.

Tom Lippincott is one of the most original guitarists on the south florida music scene. Tom received his undergraduate musical education at North Texas State and a Masters degree at the respected University of Miami. Tom is a master of the eight string guitar along the lines of Charlie Hunter. He is a brilliant composer and arranger. He teaches at both Florida International University and Miami Dade Community College. His credits include performance with his own groups, The Chassidic Jazz Project, Ed Schuller, Dave Liebman, Don friedman, Felipe Lamoglia among others.