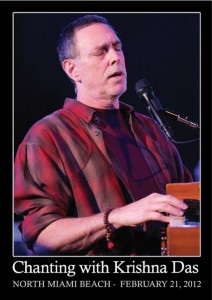 Layering traditional Hindu kirtan with instantly accessible melodies and modern instrumentation, Krishna Das has been called yoga’s “rock star.” With a remarkably soulful voice that touches the deepest chord in even the most casual listener, Krishna Das â€“ known to friends, family, and fans as simply KD â€“ has taken the call-and-response chanting out of yoga centers and into concert halls, becoming a worldwide icon and the best-selling chant artist of all time, with over 300,000 records sold.

Born Jeffrey Kagel, Krishna Das grew up in suburban New Hyde Park, Long Island, where music was part of his life from the get-go.

“His voice is like gravity,” You just fall into his voice.

The chanting just hits you and you want to be a part of it.