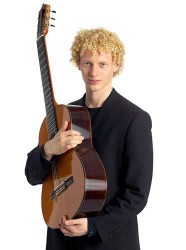 The Miami Classical Guitar Society is proud to begin the New Year with the Concert of Swedish virtuoso Johannes Moller, 2010 First Prize winner of the Guitar Foundation of America International Competition. This concert is the second of the MCGS 2011-2012 series.

Johannes Moller played his first public concert when he was 13 years old. Since then he has been featured in more than 500 appearances in Europe, Asia, South and North America. Moller has won numerous competitions, including the Dutch Vriendenkrans Concours, the Bromsgrove in England, the Ljunggrenska in Sweden, and the world renowned GFA. He has studied with Carlos Bonell, Zoran Dukic, Pavel Steidl, among others.

Admission: $20 General Admission at door / $15 members/seniors/students with ID.
No reservations required for tickets.

Find the MCGS on the Web, and become a member!
www.miamiguitar.org
Facebook- www.facebook.com/MiamiClassicalGuitarSociety

The Miami Classical Guitar Society is a non-profit cultural organization.