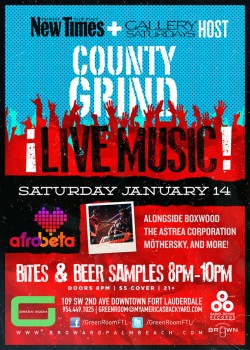 County Grind and Fort Lauderdale’s Green Room are teaming up for the first of what we hope to be many nights of music, drinking, eating, and social behavior on Saturday, January 14. On that night, County Grind Live Music series at the Green Room (our pick for 2011’s Best Cultural Turnaround) hosts a live performance by Miami’s synth-pop duo Afrobeta and several others.

Afrobeta’s Do You Party EP was selected as New Times Broward Palm-Beach’s number 10 album of 2010, but the group hasn’t had a proper showcasing in Broward until now. With additional material from its recently released debut full-length, Under the Streets, producer Tony Smurphio and frontwoman Cuci Amador have an abundance of infectious material to excite a crowd. “We wanna make you make love,” Amador sings on “Nighttime.” Sounds good to us.

In addition to the musical portion, the evening will feature a two-hour feeding and drinking frenzy featuring selections from the Green Room’s kitchen and beer samples from Fresh Beer between 8 and 10 p.m. Both floors of the venue will be decked with music photography from Monica McGivern and Ian Witlen.