7-Shot Symphony at the Deering Estate at Cutler 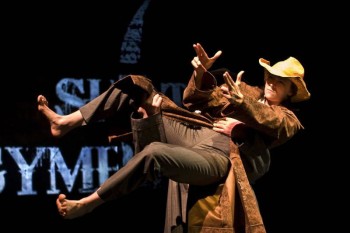 The award-winning Minneapolis-based physical-theater company Live Action Set performs its original production The 7-Shot Symphony at the Deering Estate at Cutler on Monday, January 9th at 7:30 pm.
Hailed as “the love child of Quentin Tarantino and Cirque du Soleil,” and “avant-garde for the masses,” Live Action Set’s mash-up of seven myths from around the world reinterpreted against the backdrop of America’s epic Old West has received both popular and critical acclaim across the Midwest. The show’s American setting of superhuman strength, heroism, and comeuppance illuminates the contemporary relevance of these ancient tales.

Performed without set or props, just with a whole lot of creative ingenuity, The 7-Shot Symphony places focus on the actors’ bare ability to illuminate a world of richly filled images “in such the way that Quentin Tarantino would decide to stage a play.” Creating visually entertaining and emotionally insightful storytelling, Live Action Set builds upon its roots in dance, continues its tradition of “physical theater,” and infuses elements borrowed from cinematography, cartoons, Italy’s Commedia dell’Arte, and France’s treteau traditions.

Performances are supported by live, original tunes from the Minneapolis-based band Tree Party, whose style puts a contemporary twist on traditional country music.

Originally premiering in March 2011 at Loring Theater, The 7-Shot Symphony has since then performed in Red Wing and Chicago. Their tour to Florida, Kentuky, and Tennessee marks the company’s first multi-city venture beyond the Midwest.

“Based on the success at home as well as in Chicago and Red Wing, we believe this show has the wings to take flight and soar to audiences beyond our Twin Cities. Touring extends the life of the production, employs actors, promotes Minnesota, and is a big part of our plan for long range sustainability.” – Noah Bremer, Artistic Director