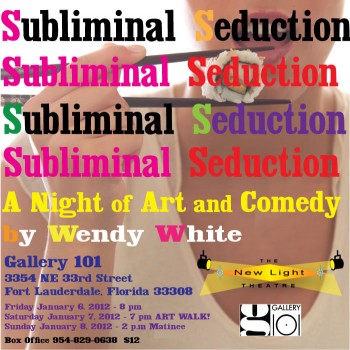 â€œAre you ready for the three S’s this New Year Babe?â€

By Popular Demand a new production of Subliminal Seduction will start the New Year 2012 with a bang at New Light Theatre!!

â€œThey were rolling in the aislesâ€ â€“ â€œitâ€™s a laugh a minute!!â€ stated a Subliminal Seduction Theatre Goer at GAB Studio at Art Basel!!

Subliminal Seduction features one-act comedies inspired by true life experiences where joy and seduction are found in the most unusual of placesâ€ states playwright and director Wendy White, â€œexpect the unexpected for a hilarious night of comedy at your favorite Sushi Bar, Minit Mart, Happy Hour, Laundromat, by working as a Temp and by cutting your Hair!â€

Adam White, Gallery owner, Gallery 101 went to see â€œWho Could Have Predictedâ€ in Miami in May 2011 at Wynwood’s GAB studio and decided to offer Wendy a permanent home in his Fort Lauderdale gallery surrounded by cafes, restaurants, boutiques and other galleries. “Wendy and New Light Theatre will be able to cast plays every month and have a solid home base from which to create. We are very excited to have her here; she is an immense talent that promises to get even bigger and better with this wonderful associationâ€ states Adam White, Gallery owner, Gallery 101(www.gallery-101.com). As a result of seeing this production, the New Light Theatre was born â€“ incorporating the revolutionary concept of combining visual arts and theatre.

Wendyâ€™s newest series of large abstract impressionist paintings will also be on display at Gallery 101. â€œCombining art and theatre is a dream come trueâ€ states Wendy. â€œI am forever grateful to Adam White for opening his doors to the all of the arts at Gallery 101 â€“ it is a true renaissance experience performing new original plays and sharing new paintings at the same time â€“ we are looking forward to sharing our new musical currently in development soon!â€

The playwright and director, Wendy White has written over 120 one-act plays and was a resident playwright, curator and director at the Kraine Theater in the East Village of New York City from 1984 to 1992, and at the Expanded Arts Theater Company from 1994 to 2001, in the Lower East Side of New York City. Her off-Broadway productions are the base for her new venue at the New Light Theatre. She recently produced The Jewish Nun to sold out audiences in Off-Broadwayâ€™s 59e59 Theatre and at the Edinburgh Fringe Festival in Edinburgh, Scotland.