Comedy and Cinema in the Grove 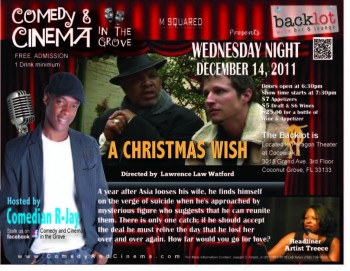 â€œIf you havenâ€™t experienced Comedy and Cinema in the Grove then you are missing the next best thing since HBOâ€™s â€œDef Comedy Jamâ€ mixed with BETâ€™s â€œLens on Talent,â€ says the Coconut Grove Gazette.

Every Wednesday evening at The Backlot Wine, Bar and Lounge, conveniently tucked away inside of the Paragon Theater in Cocowalk from 6:30pm â€“ 10pm, laughter is king and independent movies rule the big screen.

â€œComedy and Cinema in the Grove has made Wednesday night become the new Friday,â€ says Kwame Taijon a weekly patron. The word is out about this one of a kind showcase that combines stand up comedy with all genres of independent films in the plush comfort of the Backlot private lounge and Audi screening room.

â€œYou never know who’s going to show up to bless the mic.â€ Says comedian R-Jay. Last week comedian Sean Larkins of the Rickey Smiley Morning Show made an unscheduled stop along with the very funny Mario Tory. Our scheduled headliner Gil Tucker brought the house down while the host Comedian R-Jay kept everyone laughing.

Every week, along with the very talented and funny comedian R-Jay audiences are treated to a hilarious headliner before the feature presentation. This week, on December 14, 2011 the headliner will be comedian Artist Treece.

Also on December 14, 2011 the short film line up for the evening will include Attika Torrenceâ€™s â€œDilemmaâ€ and â€œSignsâ€ by Patrick Hughes. Our featured Filmmaker Lawrence Law Watford will join us via Skype directly following his short film â€œA Christmas Wishâ€ for a Q & A session.

The Backlotâ€™s professional staff caters to the audience every Wednesday night with a special menu while patrons sit back and literally kick their feet up to enjoy the show.

For the month of December there is no cover charge and only a 1drink minimum!

The Backlot Wine Bar & Lounge is located Inside Paragon Grove 13 at Cocowalk, 3015 Grand Ave. on the 3rd Floor in the heart of Coconut Grove, Florida.