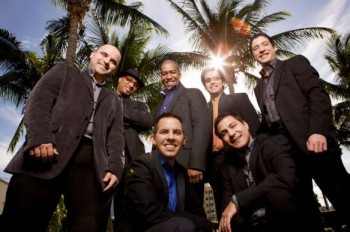 The three-time Grammy-nominated Cuban music group Tiempo Libre is one the hottest young Latin bands today. Equally at home in concert halls, jazz clubs and dance venues, Tiempo Libreâ€™s Miami-based members are true modern heirs to the rich tradition of the music of their native Cuba. Classically trained at Cubaâ€™s premiere conservatories, today, the group is a hit in the U.S. and abroad, celebrated for its incendiary, joyful performances of timba, an irresistible, dance-inducing mix of high-voltage Latin jazz and the seductive rhythms of son.

The groupâ€™s new Sony Masterworks timba recording, My Secret Radio, was released May 3, 2011. The album pays homage to Tiempo Libreâ€™s teenage years in Cuba, a time when the government forbade its citizens to listen to American music and Russia had pulled its support from the island. Inspired by their Afro-Cuban tradition, but eager to catch the new trends and sounds coming from the U.S., Tiempo Libreâ€™s members would fashion homemade antennas and secretly listen to the music pulsating from Miami radio stations at night. These secret radio sessions fueled Tiempo Libreâ€™s dreams of living in America, free to perform their songs and build the careers they wanted while helping them gather the strength that it took to leave it all behind â€“ families, friends, a country, a life â€“ to pursue those dreams. The CD is their tribute to the many powerful voices, including Michael Jackson, Chaka Khan, Gloria Estefan and Earth Wind & Fire, that rocked their world. The album features guest performances by jazz singer Rachelle Fleming and reunites Tiempo Libre founder Jorge Gomez with the legendary Cuban songstress Albita.

Tiempo Libreâ€™s first recording for Sony Masterworks, Bach in Havana, was nominated for a Grammy award for â€œBest Tropical Latin Albumâ€ and featured tracks with Paquito Dâ€™Rivera and Yosvany Terry. The CD, a fusion of Bach with Afro-Cuban rhythms, reflects the duality of Tiempo Libreâ€™s childhood days studying classical music and nights spent playing timba music. Released in May, 2009, the album received airplay on more than 200 radio stations, was hailed by Latin Jazz Network as â€œa landmark recording in the sense that Miles Davis’s Kind of Blue was approximately 50 years agoâ€ and was selected as a best pick in new Latin music by The Miami Herald. The group performed â€œTu Conga Bachâ€ from the CD on the October 27, 2009 Dancing with the Stars. In conjunction with the release of Bach in Havana, the family behind Bustelo CafÃ© â€“ for the first time in 80 years â€“ changed its Bustelo CafÃ© coffee can to feature Tiempo Libre with a free music download

In addition to their performing and recording careers, the members of Tiempo Libre are particularly committed to the sharing of their rich musical traditions through outreach and educational activities and have participated in artist in residence programs at Michigan State University and Interlochen Academy. The group has also become known for its inspiring classes on rumba, Latin jazz and traditional Cuban music, designed to reach audiences of all ages and backgrounds.
Tiempo Libre is: Musical Director Jorge Gomez on keyboard; RaÃºl RodrÃ­guez, trumpet; Leandro Gonzalez, congas; Tebelio (Tony) Fonte, bass; Armando (Pututi) Arce, drums; Joaquin (El Kid) Diaz, lead vocal; and Luis Beltran Castillo, saxophone & flute.