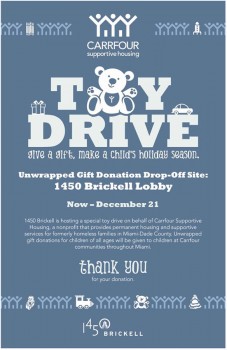 Unwrapped toy donations can be dropped-off in the lobby of 1450 Brickell office tower
Holiday toy drive benefiting children of formerly homeless families living at Carrfour Supportive Housing communities throughout Miami. Unwrapped toy donations will be given to children of families living at Carrfour communities throughout Miami-Dade County.

Miamiâ€™s 1450 Brickell office tower is hosting a special toy drive on behalf of Carrfour Supportive Housing, a nonprofit that provides permanent housing and supportive services for formerly homeless families in Miami-Dade County. Unwrapped gift donations for children of all ages will be collected in the lobby of 1450 Brickell office tower and given to children at Carrfour communities throughout Miami-Dade County.