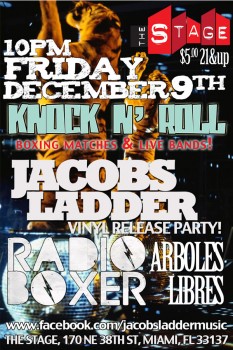 For More Info please contact The Stage at 305-576-9577 or Radioboxer at band@radioboxer.com

The Stage will be presenting a very special treat for the holidays which will remind us that in this, the most magical time of year, is better to give than to receive. This is never truer than when two fighters step in a professional boxing ring and proceed to beat the hell of each other to the sounds of three of the best rock bands Miami has to offer; which coincidentally, is exactly what The Stage got us for Christmas.The aptly named KNOCK N’ ROLL night will bring for the first time an official boxing ring at the venue’s courtyard with three boxing gyms competing during nine gruesome matches in their quest to be called the best.

But what is a fight without a great soundtrack? Covering all bases, The Stage put three of the best bands in Miami together for the first time: Radioboxer (Best band 2009, Miami New Times’ Readers Choice), Jacobs Ladder (SXSW, Warped Tour), and Arboles Libres (Best Songwriting 2011, Miami New Times). The venue will open it’s doors early when the fights are scheduled to begin and bands will be starting at 10pm. So on Dec 9th before starting to dream of a white Christmas and peace on earth pass by The Stage for a night full of punches, drinks, music and fun.