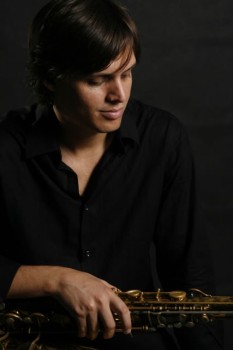 Michael Campagna has been acclaimed as one of the most original and exciting new talents in jazz today. He has performed on stages and in recording studios across the globe. His debut recording as a leader – Passionate Nature – garnered high critical acclaim. â€œHe is a great player with a great sound and a lot of melody in his heart and he makes me happy when I hear him playâ€ says saxophone giant George Garzone. â€œOnce and a while you meet musicians who have what we call an â€˜old soulâ€™, an immensely talented musician and composer, heâ€™s serious, but not so serious that you canâ€™t find the fun in his musicâ€ according to Loren Schoenberg, Executive Director of the Jazz Museum in Harlem.

A graduate of the University of Miami as a Studio Music and Jazz major, he earned a Master’s degree in Composition, while focusing extensively on woodwind doubling, in addition to improvisation and composition: he can be heard regularly performing on tenor, soprano saxophones and flute. Campagna has spent several years teaching aspiring musicians, notably at the University of Miami and at the New School for Jazz and Contemporary Music in New York City, and most recently at the “Niccolo’ Paganini” Conservatory of Music in Genoa, Italy. Michaelâ€™s versatility as a musician and composer has led him to engagements with the Florida Philharmonic, the New World Symphony and the Naples Philharmonic.

A frequent collaborator with musicians from all over the globe, Campagna has most recently been touring with internattional recording artist, JosÃ¨ James as part of his highly acclaimed Facing East: The Music of John Coltrane project as well as a high powered quintet collaboration with American trumpeter Andy Gravish entitled 5AM.