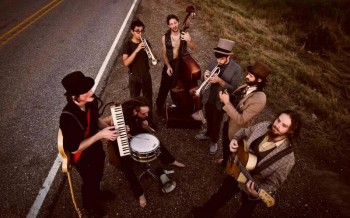 Vagabond Swing released their debut album, “Soundtrack to an Untimely Death”, in December, 2010!!! These guys are really handling their business! 7 piece band that describe themselves as an acoustic punk hybrid, boasts Mandolin, upright bass, dueling trumpets, dueling guitars, and one of the best front-man drummers you have ever seen. Their sound is Gypsy Punk Afro Jazz Zydeco Ragtime Swing Space Rock and more. Very technically driven with a fun sound that makes you dance your ass off!! Really cannot say enough about this bands live performance. This record has many people anxious to get a look!

Tony Daigle (4x Grammy winner, 17 Grammy nominations) produced the record. He recorded Eric Clapton and Vagabond Swing at the same time, while running 2 radio shows in separate cities. That is just for starters.

“I can’t seem to say enough good about [Vagabond Swing]. Their jazz-flecked gypsy music changes tempo and uses some seemingly Afro-Caribbean percussion…definitely one to watch around the Lafayette music scene.” Times of Acadiana