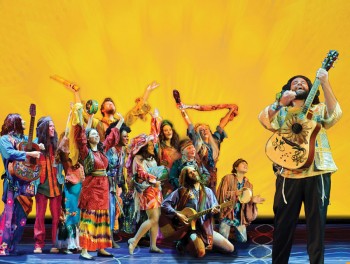 Soul Doctor, the exhilarating, riveting and hilarious new Broadway-bound musical, tells the true story of the beloved and controversial father of popular Jewish music, Shlomo Carlebach. Deemed a â€œCertifiable Hitâ€ by Larry King and examiner.com, the pre-Broadway premier debuts in South Florida on December 24, with shows first in Miami Beach, then Fort Lauderdale.

Steve Margoshes, the legendary composer/orchestrator of such Broadway hits as Elton Johnâ€™s Aida, The WHOâ€™s Tommy and Smokey Joeâ€™s CafÃ©, has woven together 30 of Carlebachâ€™s timeless hit songs into a show that CNNâ€™s Larry King described as â€œA transformative theatrical experience, with soul-stirring melodies and a story that keeps the crowd roaring with laughter and song all night long!â€

Soul Doctor takes us on a musical odyssey through the challenges and triumphs of this cultural phenomenon: his childhood escape from Nazi Germany, becoming a rabbinical prodigy in America; discovering Gospel and Soul music during his unlikely friendship with Nina Simone; his meteoric rise as a â€œRock Star-Rabbiâ€ in the 1960s, performing with Bob Dylan, Jefferson Airplane and The Grateful Dead; his struggle to reconcile his deep traditional roots with his desire to reach people of all backgrounds in the â€œfree-love generation;â€ and his personal conflicts trying to keep his family together while traversing the globe as a â€œSoul Doctor,â€ bringing joy and song to the lonely, the searching and the brokenhearted.

â€œShlomo himself was like a great theatrical experience,â€ said Daniel S. Wise, Soul Doctorâ€™s playwright/producer. â€œEven if you were in a large crowd, Shlomoâ€™s magnetism and charisma would reach you in the most personal and intimate way, igniting your imagination to discover a new level of joy.â€

Six-time Tony Award winning Broadway Producer Richard Frankel says, “We produced Hairspray, which became an international mega hit because it had a â€˜Life-is-a-joyful-adventureâ€™ quality to it. And I feel the same quality in Soul Doctor, which thrills me and makes me really happy to be associated with it.â€

Steve Margoshes has incorporated Carlebachâ€™s original hits into a spectacular theatrical score. â€œHis incredibly rich, gorgeous melodies are among the most theatrical of all the music Iâ€™ve worked on,â€ he says. â€œBroadway audiences are going to be taken in and carried away by this incredible and deeply moving story that is joyous and filled with laughter – like the great musical comedies.â€

Soul Doctor has produced rave reviews www.shlomomusical.com/press.php â€œSee it before it goes to Broadway,â€ wrote Playbill. â€œPowerful and touching! A charismatic, enlightening evening that rouses the soul … A must see!â€ wrote Bradley J. Troll of the New Orleans Times Picayune. Broadway World calls it â€œThe first major Jewish-themed musical since Fiddler on the Roof.â€ â€œThis show is already a hit and destined to become a hit on Broadway for many years to come!â€ raved Larry King