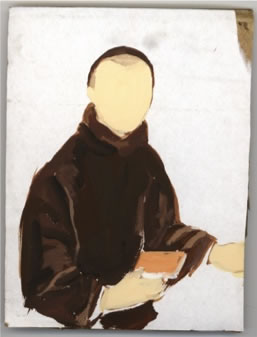 As The Official Champagne Partner Of Art Basel Miami Beach, Ruinart Champagne Is Honored To Exhibit Works By Artist Gideon Rubin In Its Vip Lounge From December 1-4, 2011

Rubin has created 19 Portraits of Figures from the Worlds of Champagne, Philosophy, and Art

Ruinart Champagne, the first established Champagne House, founded in 1729, has passionately sought to foster and collaborate with artists since its establishment. In 1895, AndrÃ© Ruinart invited the Czech Painter, Alfons Mucha, to use his fine line drawing on the advertising posters for its champagne. More than a century later, Ruinart continues to forge close links with the art world vis-Ã -vis collaborations with contemporary artists and designers. Each year, as the official champagne partner for Art Basel and Art Basel Miami Beach, Ruinart dedicates its VIP lounge to an artistâ€™s work. Following Nacho Carbonell and Patricia Urquiola, Ruinart has now partnered with Gideon Rubin, an Israeli-born artist represented by Galerie Karsten Greve, Cologne.

Born in Tel Aviv in 1973, Gideon Rubin has pondered the question of representing the individual through portraits devoid of faces. These anonymous, silent subjects provoke the imagination of the spectator left to weave a narrative informed by such clues as posture, dress, gesture, etc. In the series that Ruinart will present, â€œCollection of Ruinart Portraits,â€ the artist continues his styled approach, taking as his inspiration icons from the House of Ruinart, who pioneered relationships with the art world, and their circle of kings, artists, and philosophers.

Dug out of the Ruinart archives, Rubin has selected men and women throughout different periods of time who have embodied the spirit of Ruinart by their history, their influence on the House, or their creations.

With broad brush strokes, Rubin has painted these portraits onto old Ruinart Champagne presentation boxes and cartons where patterns and type mix with his muted palette of sand, slate blue, and off-white. The motifs become an integral part of the pictureâ€™s narration where a new dialogue takes over between cellar masters, philosophers, and inventors.

“This portrait gallery organized itself naturally as the creation advanced,â€ says Rubin. â€œOnce the work was finished, I realized that it formed a real family. It is not the standard family structure, with father, brother, or sister as references. Rather, this installation induces another vision of the family, a family of ideas, history and traditions.”
The 19 portraits that will be presented depict the following 12 figures:
Dom Thierry Ruinart: The visionary intellectual sensed that the new “wine with bubbles” developed in his native Champagne would charm the public. He became one of its most fervent ambassadors at the royal court.
Nicolas Ruinart: The nephew of Dom Thierry Ruinart and founder of the House of Ruinart.
King Louis XV: By authorizing wine to be transported in bottles, he was indirectly linked to the discovery of the bottle fermentation that makes the cuvÃ©e effervescent, giving birth to Champagne.
Prince Joseph of Ligne: One of Ruinart’s most loyal clients in the Age of Enlightenment.
Voltaire: FranÃ§ois-Marie Arouet, known as Voltaire, was a philosopher and paragon of this famous Age of Enlightenment, which saw the House of Ruinartâ€™s rise to fame.
Antoine Hazart: Cellar Master at the end of the 18th century for Claude and FranÃ§ois IrÃ©nÃ©e Ruinart, he was the first of a line of Cellar Masters who used their talents in close collaboration with the managers of the House.
Alfons Mucha: Commissioned in 1895 by AndrÃ© Ruinart, the master of Art Nouveau created a poster that caused a sensation with its modernity. This initial collaboration marked Ruinart’s first steps in the world of art.
Charlotte Ruinart: Vicomtesse Ruinart de Brimont, she took over the reins of the House in place of her 17 year old son, who was then too young to run the company. She was one of the rare women to have been head of a Champagne house.
Jean-FranÃ§ois Barot: Cellar Master from 1985 to 2002 he breathed new life into the House by redesigning the â€œgoÃ»t Ruinartâ€â€”the Ruinart taste. He contemplated highlighting the excellence of the Chardonnay, from then on dominant in Ruinartâ€™s cuvÃ©es.
FrÃ©dÃ©ric PanaÃ¯otis: The current Ruinart Cellar Master since 2007.
Maarten Baas: Artist invited to reinterpret Ruinart’s image in 2008.
Nacho Carbonell: Artist invited to reinterpret Ruinart’s image in 2010.

This collaboration with Gideon Rubin is a continuation in a series of artist collaborations. In the past, the House has collaborated with artists and designers such as India Mahdavi, Christian Biecher, Maarten Baas, Patricia Urquiola, and Nacho Carbonell. As patron of the arts, Ruinart can be found at many major international art fairs such as ARCO, CarrÃ© Rive Gauche, London Design, and Art Basel and Art Basel Miami Beach.

Born in 1973 in Israel, Rubin received his BFA from the School of Visual Art in New York City and his MFA in 2002 from Slade School of Fine Art, University College, London. Rubin has exhibited internationally and will have solo exhibitions at Galerie Karsten Greve, Cologne, and Rokeby Gallery, London, in 2012.
www.GideonRubin.com

Ruinart Champagne is globally recognized as the discerning champagne choice cultivated since its founding in 1729 by Dom Thierry Ruinart, a learned Benedictine monk, who foresaw the promising future of â€œthe wine with bubblesâ€ and began crafting a limited production of Ruinart with no compromise to quality. The House of Ruinart appreciates that essential ingredients are key to the creation of exceptional Champagnes. Ruinart harvests only the finest Chardonnay grapes with a high concentration of Premiers Crus and houses it in the iconic transparent bottle inspired from the first Champagne bottles of the 18th century. In 1768, Ruinart acquired former Gallo-Roman chalk quarries to store its bottles, which became a World Heritage site in 1931. These crayÃ¨res offer the triple benefit of a constantly stable temperature, the complete absence of vibration and a perfect humidity level, providing ideal conditions for the fermentation and maturation of the Ruinart wines and the golden thread of the Ruinart taste: pure, fine, and elegant. Dom Ruinartâ€™s vision and heritage of excellence has been passed down and continues to be a core value and tradition at the House of Ruinart.
www.ruinart.com