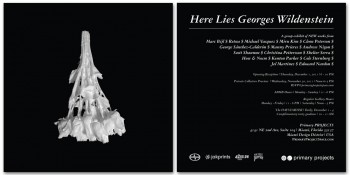 An ambitious collection of works from fifteen artists builds to a fever pitch with Here Lies Georges Wildenstein at Primary Projects. Touching on the senses of repulsion and fascination felt within the highest circles of the art world, new works from artists who bridge a solidly established academic practice with a sexy, devil-may-care attitude are unveiled exclusively during Art Basel Miami Beach 2011. The title echoes the dubious, often scandalous, activities of the 20th centuryâ€™s most influential family of dealers and researchers whose influence was so entrenched into the visual arts consciousness, that even allegations as being Nazi collaborators could not quell the mediaâ€™s fascination with their limitless professional and personal clout.

Prompting a range of piercing questions, do artists allow their works to be swept up in the mass of collectors, curators, museum trustees (those who wield considerable socio-political powers over them) or do they throw a defiant, metaphoric spit in the face as their work critiques the â€˜establishmentâ€™ they love and loathe? Thereâ€™s no clean description of the works or artists, themselves. This is quite literal with Miru Kimâ€™s performance piece of â€˜The Pig That Therefore I Amâ€™, as she comes into intimate, often dangerous, contact with a caged throng of live pigs. A self-professed hygiene freak, the performance emerges as a catalyst and nightmare for the 30 year-old photographer, lauded and decried for photographs placing her naked body set against forgotten industrial and urban landscapes.

The institutional stature of Ancient calligraphy and the clandestine nature of â€˜choloâ€™ graffiti are meshed together by Retna, swathing available surfaces with his cryptic text. A dedicated approach to poetry binds elegant visual content with potent urban rhythms, drawing viewers from the social gutters all the way to the cosmos.

Installation artist Marc Bijlâ€™s black pyramid raises and violates the public monument as a single gesture; the sanctity of a structure intended for intellectual praise and reflection is defaced with mark-making vandalism revealing its own dark truth. Further, Shelter Serraâ€™s pure white resin casts of wilted roses, a noose and an HermÃ¨s Birkin bag are veritable â€˜death masksâ€™ of common objects carrying associations of privilege, excess and emptiness.

Regardless of the artistâ€™s intentions, a highly cultivated audience is addressed, forced to confront a bold visual representation of greed, luxury, deceit, politics and entitlement that accompanies the â€˜old moneyâ€™ social strata comparable to that of Wildenstein, Rockefeller and Getty. The honesty of the works and their creators ultimately end up on the walls and collections of those who pointedly lack the artistâ€™s creative powers. The aesthetic context is a broad chronology of power plays and behind closed-door contemporary art commerce. Deploying the concealed dynamics driving the most influential, seemingly unbreakable personalities in the art world towards their loftiest ambitions, the exhibition embodies the brash processes of manipulation that historic dealers, curators and artists, themselves, have engaged with for over three centuries. In this space, intelligent design and sheer creative force will come together with disturbing, intriguing and shocking results.

Primary Projects is a multidisciplinary space, positioned at the heart of Miamiâ€™s Design District, which aims to explore and promote multiple forms of aesthetic expression from established and emerging artists, alike. Utilizing extensive, and wholly specific, experience in producing street-level curatorial endeavors in Miami, the creative forces behind Primary Projects unites the commercial and critical efforts of artists, critics, curators, professionals and patrons; the result is the vital presence of an intelligent, alternative arts environment with an bold urban sensibility delivered through a diverse range of media. Here Lies Georges Wildenstein is curated by BooksIIII Bischof, TYPOE and Chris Oh.

Powered by artistic collective Primary Flight, Primary Projects is a multidisciplinary 4,000-square-foot space, exploring and promoting multiple forms of aesthetic expression from established and emerging artists. Utilizing their extensive experience in producing street-level curatorial endeavors in Miami, the creative forces behind Primary Projects (BooksIIII Bischof, TYOPE and Chris Oh) unite the commercial and critical efforts of artists, critics, curators, professionals and patrons resulting in a vital presence of an intelligent alternative arts environment with a bold, urban sensibility delivered through a diverse range of media. Since 2007, Primary Flight has brought together more than 150 of the worldâ€™s most influential artists to install their bodies of work live in the streets of Wynwood, the Design District and greater Miami-Dade. Serving the Miami contemporary art community as an incubator, the collective delivers a distinctive brand of outdoor and gallery-based works harboring the defiant spirit of counter-culture presented to the public through a sophisticated cultural outlet.