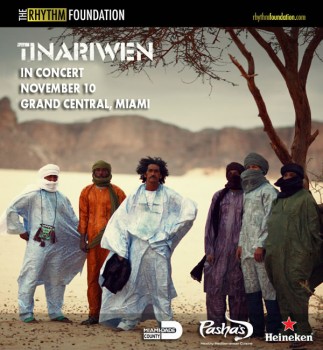 “Let’s get one thing straight: Tinariwen is just about the best guitar-based rock band of the 21st century.” – NPR

“The Clash of the desert,” Tinariwen are nomadic Tuareg guitar-poets from Mali’s southern Sahara. They made waves throughout the Saraha playing what became the soundtrack for Tuareg independence. Now they are making waves in the international rock scene. The group have won countless awards for Best CD of the Year in polls around the world and a prestigious BBC Award for World Music. Their glorious new CD Tassili was recorded with participation from friends/ fans like members of Wilco, TV on the Radio, and New Orleans’ Dirty Dozen Brass Band.

Tinariwen’s edgy, bluesy sound has earned them fans like Robert Plant and Carlos Santana, whose music inspired Tinariwen’s members when they first picked up guitars. While Plant has dedicated his career to exploring and exploiting the bent blues note he recognizes as African, Tinariwen listened to Led Zeppelin while in military training camps in Algeria. The group co-founded Festival in the Desert, an international annual musical gathering based on a Tuareg tradition where desert dwellers gather for camel races, sword-fighting displays, and campfire music.

The group returns to Miami after their unforgettable Florida debut in 2009 at the
Heineken TransAtlantic Festival.

Tinariwen in concert is presented with support from Pasha’s and Heineken USA.