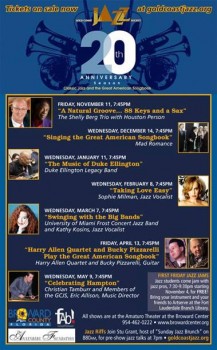 Tickets by season subscription or by show.
Purchase tickets at www.goldcoastjazz.org

It all began when local jazz enthusiast and philanthropist, Fred Ruffner and a group of local jazz fans decided that Fort Lauderdale needed more jazz. There were a few jazz clubs around South Florida, but no one presented a consistent jazz series. From that initial meeting, the Gold Coast Jazz Society was born. Incorporated in 1992, Gold Coast Jazz began presenting a series of jazz concerts in the main dining room of the Riverside Hotel. From those humble beginnings, the organization grew, added educational and outreach activities as well as an annual fund raiser. The jazz concert series moved to the Amaturo Theater of the Broward Center for the Performing Arts where it is presented today. The presentation of a jazz series featuring renowned jazz artists has always been a part of the mission of the organization and that tradition continues for the 20th Anniversary Jazz Season.

The 2011-2012 jazz series includes seven jazz concerts featuring international jazz stars as well as outstanding local jazz talent. All concerts begin at 7:45pm and occur at the intimate Amaturo Theater at the Broward Center for the Performing Arts, 201 SW 5th Avenue in Fort Lauderdale. A lively and entertaining jazz talk takes place at 7:00pm prior to each jazz show, hosted by local jazz personality Stu Grant. Full subscriptions and Jazz Sampler subscriptions are now available by calling the Gold Coast Jazz Society at 954-524-0805. Single tickets will be available after August 15 at the Broward Center Box Office at 954-462-0222 or online at http://www.browardcenter.org.

The opening concert of the series will occur on November 11 featuring the Shelly Berg Trio and Houston Person with A Natural Grooveâ€¦88 Keys and a Sax. Dizzy Gillespie said that sax man Houston Person, is â€œone of the best! Heâ€™s got bull chops.â€ Sporting a soulful sound in the tradition of Gene Ammons, Person often worked with the legendary singer Etta Jones. Shelly Berg, jazz pianist and Dean of the UM Frost School of Music is considered to be one of todayâ€™s top jazz pianists and has several critically acclaimed recordings to his credit.

On December 14, vocal jazz enthusiasts will enjoy the stylings of the vocal jazz quartet, Mad Romance as they perform Singing the Great American Songbook. This hip vocal group performs an eclectic assortment of songs from the Great American Songbook in a surprising variety of styles that incorporate classic jazz, mambo, soul, a cappella, and madcap swing. In the tradition of groups such as the Modernaires, Manhattan Transfer and New York Voices, Mad Romance features Miami-based jazz vocalists Greg Diaz, Rick Harris, Lisanne Lyons and Wendy Pedersen. Jim Gaisor, pianist, Jamie Ousley, bassist and Carlomagno Araya on drums round out the group for an evening of great vocal and instrumental jazz.

With Valentineâ€™s Day just a few days away, Gold Coast Jazz tips their hat to jazz lovers on February 8 by presenting jazz vocalist Sophie Milman in Taking Love Easy. Milman is a hot rising star on todayâ€™s jazz scene and this will be her Fort Lauderdale debut. The Canadian singer is an â€œexceptional young talentâ€¦ she is one of a kind,â€ says the LA Times and she is blessed with a â€œwarm, tasty sound, outstanding playing and inventive arrangements.â€ New York Magazine calls her the “Norah Jones of the actual jazz world.â€

The University of Miamiâ€™s Frost Concert Jazz Band is a rockinâ€™ jazz machine and they will be the featured artists on March 7 in Swinging with the Big Bands. ASCAP award-winning, singer, producer, songwriter Kathy Kosins, joins the band for this evening of great swinging big band music. Led by Dante Luciani, the UM Concert Jazz Band has continually won numerous Downbeat Magazine awards in the prestigious Large Jazz Ensemble category at the annual Student Music Awards. They will knock your socks off as they perform some of the best of the big band music.

The vibraphone is one of the most versatile of all the mallet percussion instruments and is used widely in Jazz and Popular music. The legendary jazz musician, Lionel Hampton, brought the vibraphone to greater prominence in the jazz world. On May 9, vibraphonist, Christian Tamburr celebrates Hampton and other outstanding vibes players in a concert, Celebrating Hampton. Tamburr is a multi-faceted instrumentalist, accomplished on the vibraphone, piano, trapset, world and orchestral percussion instruments. Downbeat Magazine awarded him the â€œOutstanding Solo Jazz Performer.â€ Tamburr leads a critically acclaimed jazz quartet, has toured around the world as pianist and musical director for Latin vocal legend Julio Iglesias, was the music director for Cirque du Soleil and is the resident Principle Pianist at the Aria Resort and Casino Las Vegas NV. Joining Tamburr will be musicians from the Gold Coast Jazz Society Band directed by Eric Allison.

For more information about the 20th Anniversary Jazz Concert Season, go to www.goldcoastjazz.org. The Gold Coast Jazz Society is a not-for-profit organization that is dedicated to the preservation and promotion of jazz music through a mainstage concert series, free community concerts, educational programs, a jazz scholarship program and the Gold Coast Jazz Society Band, under the direction of Eric Allison, Music Director.

Funding for this organization is provided in part by the Broward County Board of County Commissioners as recommended by the Broward Cultural Council, the Annenberg Foundation and Funding Arts Broward. Season sponsors include DeMeo Young McGrath; HI Foundation; Morgan Stanley Smith Barney; the Broward Center; the PaperMill, WLRN FM, and South Florida Consulting.