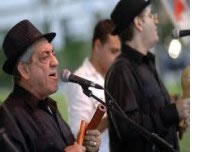 Miami’s own Conjunto Progreso was nominated for a 2005 Grammy Award for Best Traditional Tropical Latin Album for their CD “Masters of Cuban Son” on Pimienta Records dist. by Universal Music. Their New CD titled “Master Sessions: Descarga & Son: was release in early 2008 on Warner Latin/Union Music/Mojito Records.
Ever since its inception, the traditional Cuban Son ensemble Conjunto Progreso has taken audiences back in time to the nostalgic era of early Cuban popular music.