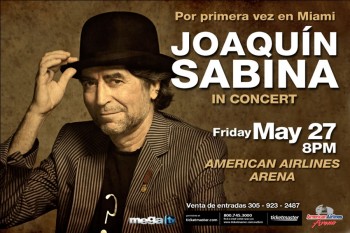 At the top of his successful career, legendary Spanish singer and composer JoaquÃ­n Sabina will perform for the first time in the U.S., as part of the world tour he began over a year ago, which has included more than 100 concerts in Spain and Latin America. He will bring his â€œEl PenÃºltimo Tren Tourâ€ to the U.S. accompanied by his own band with stops in New York (May 25), Miami (May 27) and Los Angeles (May 29). In New York, he will sing at the Hammerstein Ball Room, in the Manhattan Center; in Miami, at the American Airlines Arena, home of the NBA team Miami Heat, and in Los Angeles at the Nokia Theatre L.A. Live. The promoters have said Sabina will sing his greatest hits and some cuts of his latest album, â€œVinagre y Rosas.â€

All the concerts of the â€œEl PenÃºltimo Tren Tourâ€ have been sold out, including the one at the Plaza de Toros de Las Ventas, in Madrid, attended by 20,000 spectators, and the one at La Bombonera stadium, home of soccer team Boca Juniors, in Buenos Aires, where 50,000 people came to see him. Sabina will return in March to the capital of Argentina to perform at the Luna Park coliseum, in another sold out concert.