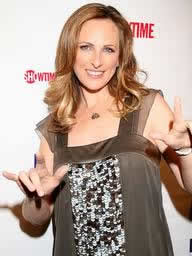 Academy Award winning actress Marlee Matlin will be the guest of honor at Winter Party Festivalâ€™s VIP Cocktail Reception, Saturday, March 5, beginning at 7:30 p.m. at the Bass Museum of Art, 2100 Collins Avenue, Miami Beach. Joining Matlin will be Rea Carey, executive director of the National Gay and Lesbian Task Force, as well as Winter Party sponsors and VIPs. Tickets to the reception are also available to the public.

Matlin won the Academy Award for her performance in â€œChildren of a Lesser God.â€ At 21, she became the youngest recipient of the Best Actress Oscar and only one of four actresses to receive the honor for her film debut. In addition to the Oscar, Matlin received the Golden Globe Award for Best Actress in a Drama. In 2007, she joined the cast of Showtime Networkâ€™s groundbreaking series â€œThe L Wordâ€ for three seasons.

â€œWe are thrilled to welcome Ms. Matlin as our special guest at this yearâ€™s VIP Reception,â€ said Chad Richter, Festival chairperson. â€œNot only is she an accomplished actress but also sheâ€™s a successful author and noted humanitarian, donating her time for several important causes, including the American Red Cross, Easter Seals, and the Children Affected By AIDS Foundation. We look forward to hosting her at the reception.â€

Tickets to the VIP Reception are $85 in advance and $100 at the door and include hors dâ€™oeuvres courtesy of Vita by BÃ¢oli in Miami Beach and cocktails courtesy of GREY GOOSE. Tickets for the VIP Reception as well as for other events are also available as part of discounted, multi-event passes. For more information, to purchase tickets and passes, or to check out the complete schedule of events, visit www.winterparty.com.

About The National Gay and Lesbian Task Force:
The mission of the National Gay and Lesbian Task Force is to build the grassroots power of the lesbian, gay, bisexual and transgender (LGBT) community. We do this by training activists, equipping state and local organizations with the skills needed to organize broad-based campaigns to defeat anti-LGBT referenda and advance pro-LGBT legislation, and building the organizational capacity of our movement. Our Policy Institute, the movementâ€™s premier think tank, provides research and policy analysis to support the struggle for complete equality and to counter right-wing lies. As part of a broader social justice movement, we work to create a nation that respects the diversity of human expression and identity and creates opportunity for all.