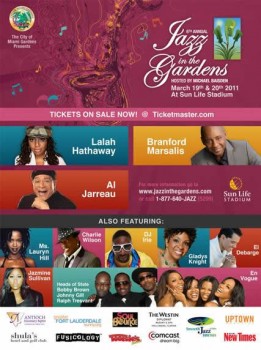 After six years of unforgettable concert experiences and entertainment, Jazz in the Gardens has grown to become one of the most highly regarded and anticipated music festival events in the country.

On March 19th & 20th, 2011, Jazz in the Gardens will continue the magical annual tradition at SunLife Stadium, hosting an event that will surely surpass last yearâ€™s experience with another illustrious lineup that continues to make this festival second to none. Your Jazz in the Gardens weekend experience will include pre-festival events, after parties, fabulous shopping, community events and much, much more!

Jazz in the Gardens, voted the best festival of 2010 by Miami New Times, has upgraded their already star-studded line up to include former New Edition members Bobby Brown, Johnny Gill and Ralph Tresvant to the two-day music festival, returning to Miami Gardensâ€™ SunLife Stadium for the 6th consecutive year, March 19 and 20, 2011. Performing under the name â€œHeads of Stateâ€, Brown, Gill and Tresvant will reprise their exhilarating chart topping hit making career, which is widely credited for inspiring and originating the explosive boy band movement of the 80s and 90s. The group replaces Doug E. Fresh & Slick Rick â€œThe Rulerâ€ on the bill.

Saturday, March 19, 2011, â€œJazz in the Gardensâ€ attendees will be treated to electrifying performances by Ms. Lauryn Hill, Charlie Wilson, Al Jarreau, Jazmine Sullivan and Brown/Gill/Tresvant aka â€œHeads of Stateâ€. Sunday, March 20, 2011 line up will feature R&B legends Gladys Knight, EnVogue, El DeBarge, Lalah Hathaway and Branford Marsalis performing their classic hits. Joining the star-studded cast, and adding his unique and internationally renowned mixing skills, is Miamiâ€™s own bright star, D.J. Irie, the official DJ for The Miami Heat and now â€œJazz in the Gardensâ€. Tickets are on sale now at http://www.jazzinthegardens.com/, Ticketmaster locations and online, and at the SunLife Stadium Box Office. Tickets range from $45 for General Admission to $70 for Prime Reserve. Discounts available for 2 day passes (best value).

â€œJazz in the Gardensâ€ owes its success to a simple formula: a star-studded line-up, great food, extraordinarily affordable ticket prices and amazing weather. For the past five years the festival has enjoyed unprecedented growth, consistently delivering stunning increases in attendance. The 2010 festival garnered a heaping 45,000 guests, attracting both locals and thousands of out-of-towners to the beautiful City of Miami Gardens â€œLike all Jazz in the Gardens fans, I wait in anticipation to hear who is performing and once again Iâ€™m excited! The 2011 line-up is absolutely fantastic and I look forward to all the fans from around the nation joining us again. This added event in Miami Gardens brings added value to the City and to South Florida in general. I am proud of our City; in the seven years since incorporation, the City has seen a number of tremendous positive changes and improvements. There is a lot more work ahead of us, but Jazz in the Gardens is more than a concert, it is an opportunity and experience that people want to enjoy year after year,â€ says Mayor Shirley Gibson.